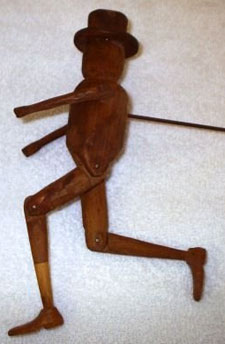 During performances, Jeff Davis employs a dancing fellow called a "Limberjack." A Limberjack is basically a wooden doll with loose joints. The performer holds it on a long stick that is attached to its back, and taps it rhythmically on a thin, springy wooden platform that he makes vibrate. Making a Limberjack "come alive" is a difficult skill that requires considerable patience and practice to become proficient. However, a child can learn basics in a few minutes.

Limberjacks may be bare wood, or decorated and customized with paint, clothing, hair, etc. The one Jeff Davis uses is made of birch. LImberjacks made out of pine will not last as long.

A Limberjack appears to have been a New England invention from about the mid-1800s. The earliest patents date from 1863, but that does not necessarily indicate when it was first invented. Speculation is that it was of African-American origin, like the banjo.

The origin of that term Limberjack seems to date from the 1960's. In the early 20th century, it was commonly called a "jigaboo," which is now considered a derogatory term. Other names used include Dancing Dan, Jumping Johnny, Jig Doll, Slapjack, Jiggerman, Limberjim, Limberjill, Paddle Puppet, Yankee-Doodle Dancer (or Pierre in David Coffin's case.)

Jeff Davis is one of the nation’s foremost performers, interpreters and collectors of traditional American folk music.

"A fine interpreter of traditional song" Sing Out!
"An excellent banjo frailer and fiddler" The Living Tradition
A "charismatic master" whose "knowledge of this repertoire is second to none." NetRhythms
See more reviews...